Portions of this article first appeared in the Colorado Gambler magazine in 2006.

Long before the appearance of prospectors and white settlers, Indians had long enjoyed the virtues of the South Platte River, a gentle but wide waterway that cuts through the central and northeastern portion of Colorado. When Anglo Americans discovered the river as early as the 1830’s, they too enjoyed its ample fishing holes, scented pines, picturesque valleys and fresh mountain air.

By 1876 the Denver, South Park & Pacific Railroad was laying its rails along the South Platte. From Denver, the railroad traveled south through Buffalo Creek, Pine and eventually to Leadville. The South Platte branch of the area in Jefferson County soon blossomed to include a number of small communities. Among them was the actual hamlet of South Platte, landmarked by the South Platte Hotel. The hotel sat just 11 miles east of Buffalo Creek and 16 miles north of Deckers. It was a two-story wood frame affair with an upper balcony skirting the front of the building. Along the top, visible for some distance, was the sign reading “South Platte Hotel”.

Both the hotel and a tiny depot were located at the confluence of the north and south forks of the South Platte River. For unknown reasons, South Platte was alternately known as Symes. A post office under that name opened February 9, 1887. By May of 1896, there were no less than 500 mining claims around South Platte as more communities came into existence. One of these was Nighthawk. The small town with the intriguing name was located in such a beautiful area that promoters soon envisioned it as a prominent tourist resort.

At an elevation of 6,200′, Nighthawk was located in Douglas County on the banks of the south section of the South Platte River. Most historical annals identify Nighthawk as a mining camp, although in reality the community was meant to become one of many premier resorts Colorado was so famous for. Located just 33 miles from Denver by train or 40 miles by wagon road, the place offered a unique getaway for city dwellers. Nighthawk’s only newspaper, the Mountain Echo, premiered on July 10, 1897. The paper was published each Saturday under the direction of editor T.C. Knowles and business manager H.C. Wood. During its short lifetime, the paper was the only periodical within a 25 mile radius. Subscriptions to the paper were initially $1 per year.

By 1897, the Nighthawk Town, Mining & Improvement Company was already in place with an office in Denver. One F. Alley was employed as general manager. Douglas Avenue appears to have been the main drag. From the South Platte depot, along what was alternately known as the South Park Road, stages met the trains and took passengers the remaining 4 ½ miles to Nighthawk. The fare from Denver cost between $1.25 and $1.70.

Although advertisements fairly screamed for folks to come to Nighthawk for pleasure (Tell Your Friends About Nighthawk!”), there were still a few mines. The Caledonia Gold Mine was among the most prominent, owned and operated by the Nighthawk Mining and Milling Company, Inc. with E.T. Hanna serving as its authorized agent. Other mines included the Agnes and the Kitty Clyde. Although Nighthawk never had a government post office, daily mail service from South Platte was available by July 17, 1897. Hanna distributed mail from a small postal station and sold camping supplies.

Promoters at Nighthawk certainly worked fast. Editorials promoting the new town talked lovingly about the “towering and craggy mountains” and “tall and stately pines” surrounding the area. Ample fishing, hordes of berry bushes, abundant wildflowers and even the nearby Strontia Mineral Springs completed the picturesque description of Nighthawk.

By August of 1897 one could find accommodations at the Craggie View Hotel or the local boarding house at Nighthawk. A.J. Dugger was offering general blacksmithing and wagon work at Douglas Avenue and Pine Creek Street. A month later C.B. Derby opened a store with “groceries and provisions at Denver prices.” A carnival was held in October, followed by the premier of the Nighthawk General Merchandise Co. and Miss Annie Vermillion’s Post Office Store with confections and stationery. Interestingly, most residents did not live in Nighthawk proper, but rather along Sugar Creek just south of town.

Nighthawk continued to blossom. In November I.P. Cleary opened a feed and livery stable and a Miss Harger began teaching school there. Sunday School children also could catch services in nearby Trumball. Residents celebrated with a turkey shoot. The Mountain Echo also reported on railroad tycoon David H. Moffat and Eben Smith’s plans to construct an electric power plant at Goldfield in the Cripple Creek Mining District some 60 miles away. Doing so would require building a dam on the South Platte near Nighthawk. Such an endeavor would not only be a feat for the 19th century; it would also bring Nighthawk into the limelight even more.

In February of 1898 mining prospects must have been looking better, judging by the appearance of Mining Engineer A.F. Polhamus at the nearby community of Daffodil some nine miles from Nighthawk. Nearly next door at Trumbull, miners could party the night away at the Miner’s Home Saloon run by C.P. Combs or another tavern operated by J.S. Gardner, or get a .25 cent meal and a room at Mrs. M.M. Smith’s Half Way Restaurant. Fatty Miller also opened the Palace Saloon at West Creek, offering keg beer and lunches. By April, Charles F. Denison was selling Hercules powder, fuse and caps at Nighthawk.

Cripple Creek was mentioned in conjunction with Nighthawk again in April of 1898 when it was announced that any new rails from Cripple Creek to Denver would surely pass through Nighthawk. Then in 1899, the Denver, Cripple Creek & Southwestern Railroad purchased right of ways for a “Nighthawk Branch” and began constructing a spur.

By January of 1899, Mrs. J.E. Pitts was running Trumball’s Half Way Restaurant and directing travelers to Nighthawk. Then on January 31, the Symes post office finally changed its name to South Platte. Such small changes were early signs of a developing metropolis, but it was never to be. The last issue of the Mountain Echo was published in February of 1899. By then, ads reading “Come to Nighthawk” almost seemed like pleas. Town promoters switched their ads, asking folks to “buy lots in Nighthawk” to the West Creek Mining News.

Nighthawk did continue to experience limited success for the next several years. In October 1899 W.H. McMahon opened yet another general merchandise store there, and in 1900 James Kelly was running a huge boarding house on Sugar Creek with 38 lodgers. More communities, such as the resort of Bethesda, popped up near Nighthawk as the Nighthawk Branch of the railroad began service in 1902.

In spite of all efforts to turn Nighthawk into a vacationer’s dream, for some reason the town just failed to catch on. By about 1910 only a few structures were left at Nighthawk. Photographs of the community show two frame structures identified as the post office and a dance hall, with a tent reposing on the site of the Craggie View Hotel. A stable that once serviced the hotel was also still standing. A few broken down cabins and a gabled home are also depicted. By then only a few residents were left, among them mail carrier J.C. MacDonald and sawmill laborer Hugh Kendall. Roughly 70 people were living along Sugar Creek.

Railroad service to Nighthawk ceased in 1916. By 1920 there were only 35 people left at Nighthawk, most of them farmers. Both Nighthawk and Bethesda appeared on 1923 maps, though merely as place names. Only 26 residents lived at Nighthawk in 1930, including school teacher Minnie Norman. The South Platte post office closed September 15, 1937. A year later, the railroad through South Platte ceased operations.

Soon the remaining cabins in and around Nighthawk became nothing more than summer homes. Today the road through South Platte is a part of the Colorado Trail. At Nighthawk, a few occupied buildings are visible in the trees above the road. Many areas along the river still serve as ideal camping and picnic spots. In their own small way, Nighthawk and South Platte still survive as the resort areas they were meant to be. 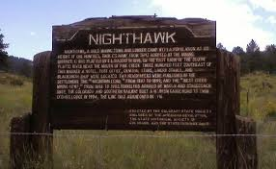 While summer homes accommodate part time residents at Nighthawk, almost all of the original buildings are now gone. One exception is the schoolhouse which is now a private home. Only an interpretive sign at the townsite informs travelers as to what was once there.