The saddest part of being an historian is, truly, lamenting what is lost. There are those types out there who extend more professionalism towards the loss of a building, a piece of furniture, papers, photographs or some other tangible piece of history that marks where we have been and gives us a timeline of how far we have come. But the true historian, the one who looks after such things like a beloved grandmother, feels that loss deep their heart. The grief is not a fun emotion, but true love of history is what compels us to work harder to save, preserve and enjoy our links to the past.

Saturday night I watched in horror as the Miner’s Union Hall in Victor, Colorado burned practically to the ground. My main newsfeed was Facebook, where my friends posted timely pictures of the fire in progress and what was being done about it (no thanks, by the way, to local newscasters and a certain Colorado Springs newspaper who simply wrote off this landmark event as another old building going down in a sleepy mining town whose history no longer matters to them). Pride in my former home and its people swelled as I read about how they felt about this historic monument going up in smoke, and their efforts to comfort and assist each other.

The destruction of this building, sparked by a simple lightening strike during a typical July thunderstorm, brought back a flood of memories. How many times had I pointed out the bullet holes in the front of the building, inflicted during a skirmish in the tumultuous labor wars of 1903-1904? How many times have I written about this building’s eventual transformation to a movie theater, then to a gymnasium for the school, and finally a mostly-empty shadow of its former self? Mike Moore, who once ran the Victor-Lowell Thomas Museum and is now gone, once took me in there to show me floor-to-ceiling boxes filled with priceless artifacts and two beautiful 1920’s-era automobiles. I marveled over the shiny gym floor and that the antiquated drinking fountains remained intact.

That was in the late 1980’s. Those items had long been cleaned out by last Saturday, but a myriad of new historic events had taken place in between the two times. Indeed, the old Miner’s Union Hall had sat empty for a very long time, it’s white-painted facade waiting patiently for someone to come along and care for it again. By the summer of 2012 efforts had been in place for quite some time to restore this most historic building to its former grandeur. The dream of total restoration and rehabilitation was finally achieved just a few months ago. The people who accomplished this feat not only put a lot of money into the effort. They also put their heart and souls into making sure that this facet of Victor’s amazing history remained intact for all to enjoy, forever.

Not so much. The lightening and ensuing fire on Saturday shocked the hell out of everyone. Those who gathered to watch were mortified. I can only imagine the gamut of emotions running through this tightly-knit community: Sadness that the building was burning. Hope that it could be saved. Relief when the flames died down. Shock when the fire picked up again. Terror when the city ran out of water and the flames began leaning wistfully towards other historic buildings including the grand Victor Hotel. Relief when the Cripple Creek & Victor Mine brought in water trucks. Frustration over the hard work conducted to preserve the building over the last nine years. Grief when it became apparent that 90% of the interior was gone. Anguish over whether what is left of the building can be saved. Sorrow for Barbara McMillan, the building owner who just some weeks before hauled an entire inventory of antiques into the building and was opening a shop. She had yet to be insured due to Colorado’s tricky insurance policies.

It is Tuesday now. Engineers, historic preservationists and architects are laboring over the Union Hall, assessing whether—if at all—it can be saved. Residents are still on boiling orders now that water has been restored. Local businesses continue their on-going efforts to help out. Eventually, cleanup operations will begin as this latest chapter of Victor’s history melds into the books. We will mourn, wish and wonder as the city deals with its grief over this loss in its own way. And we will go on knowing that, like it or not, good or bad, happy or sad, history has once again been made. 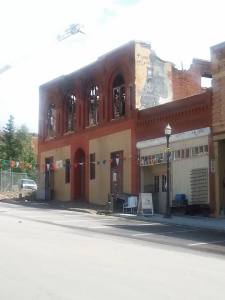 The Miner’s Union Hall in the aftermath of the fire. Photo courtesy of JoAnne Hartensteiner Allen.

Check out two of my books, available at University of New Mexico Press, http://www.unmpress.com

Where were you then?
Were you locked away in your Mountain-cliff house?
Did you hear the breath of night
Whispering down your neck?
Did your dress dance across the dirt floor
As your man’s fiddle
Broke the cold glass night?

And before your man,
Were you a whore who found the Lord
When a bristle-faced stranger
Tipped you a gold nugget
And asked you to be his wife?
Or were you from a fine school
With a well-kept lawn,
Safe under your daddy’s heavy hand?

Where are you now?
Are you still locked away in your mountain-cliff house?
Or under leaves in a hole off the highway
Where a tourist may stalk the picture on your stone
And read your “good mother” epitaph.

I think you were adventurous, woman.
You were the adventure.
You are in your children and their children,
Still seeking that new frontier.
I think sometimes I feel you
When the sea air licks my ear
And my man’s Monday night football
Breaks the night.

They called him by his nickname, Muck. Or his alias, Jim Mack. But Ralph McJunkin was flying straight when he rode in the Prescott Rodeo.

Born in Colorado in 1890, Muck was second to the youngest of twelve children. The McJunkins moved to Farmington, New Mexico when Muck was just a baby. Soon they were prominent farmers and lumber merchants, and a couple of Muck’s older brothers ran trading posts.

Muck had no tolerance for such stuff. The wide blue skies and endless prairies welcomed him. Out there, far away from stifling civilization, he learned how to live off the land, how to speak Navajo and how to work horses and cattle. In time, he knew every river, arroyo and canyon, and could follow the dimmest trail to the remotest places. The life suited him.

But a living had to be made. With little education behind him, Muck tried his hand at coal mining before returning to the plains and finding ranch work. Lasting friendships were made with the folks around Farmington, and Muck was a good hand. He was working as a “sheepman” when he married a local Navajo girl at Aztec in about 1918, but when she set his belongings outside the door (the tribal custom for divorce), Muck moved on.

By 1920 Muck had taken a second wife, Addie. She had her own burden to haul with two children from her last marriage and a brother to look after. The family home was made even smaller by a friend who boarded with the family and worked beside Muck as a butcher down in McKinley County. The arrangement must have smothered Muck, and when Addie suggested they move to Peach Springs, Arizona, it was alright with him.

Peach Springs was a refreshing change, at least for a little while. It was cooler there. Addie, who disliked the idea going to restaurants and eating processed food, could grow vegetables. The couple now had a child of their own, and Addie wanted a settled lifestyle. For the next couple of years Muck found odd jobs and ranch jobs in the area. But his eye was surely on surrounding towns, where cowboys were earning good money in contests. The annual Frontier Days at Prescott was especially appealing. They were calling this event a “rodeo”, which Muck found out was a Spanish word for “round up”.

By 1926 Muck had saved enough money to go to Prescott and had the glory of participating in the rodeo. He didn’t win anything, but someone gave him a picture of himself busting a bronc. Maybe his dream was shattered, or maybe the restless Addie wanted a change. Either way, the McJunkins eventually made their way back to Farmington where Muck was hired as a deputy sheriff. He like the job well enough; it kept him out on the reservation and away from town.

Then came a fateful night that would change Muck’s life forever. He had been wrongfully accused of keeping confiscated liquor for himself and quit his job in disgust. His brother Jim suggested they go over to Aztec for a dance. As the evening wore on a fight broke out. Jim looked to be getting the worst of it as everyone tumbled outside. Shots were fired, including at least one from Muck’s service revolver.

In the end a man was dead, and Muck was on the run for fear he’d delivered the fatal shot. Although he was actually innocent, Muck spent the next five years drifting around California and Oregon under fictitious names. He made his way by picking up movie parts with other cowboys on Gower Street in Hollywood and ran a streetcar in Los Angeles. He was also gored by a bull in Hawaii. Trusted friends and family were visited for only short amounts of time before Muck would move on, seldom saying where he was going. Ultimately, in 1933, Muck was caught in a small Oregon town and brought back to New Mexico. He served a year in the pen for fleeing the murder scene in Aztec.

Addie divorced him, but upon being released in 1934 Muck started over again. He remarried, went back to ranching, helped build Blanco Trading Post south of Aztec, worked as an Indian agent, “wildcatted” for various oil rigs and raised a stepson and another daughter. Times were tough; the family was often stranded in remote places with little to eat. All the while, Muck tried to forget the past and his shattered hopes for becoming a rodeo cowboy. There were a lot of regrets, especially when Addie refused to let him see his oldest daughter. Not until she was a young woman did the girl realize her father was still alive, not dead as her mother had led her to believe.

Ghosts are hard to shake. Some say that gunfight at Aztec caused some hard feelings among friends; others say Muck might have got involved in something much darker. On a late afternoon in August of 1947, Muck kissed his youngest daughter and stepson goodbye and headed out for a ranching job. His car broke down at Blanco Trading Post south of town, and he dined with the owners. He was last seen talking to a trucker, and it was assumed he’d hitched a ride—until the next morning. Some tourists from Kentucky stopped at Blanco Trading Post and two children from the group went exploring. It was they who found Muck hanging in a nearby hogan with a gash in the back of his head. His murderer was never caught.

Jan MacKell Collins is the grand daughter of Ralph “Muck” McJunkin. She continues to conduct research on this fascinating man and hopes one day to solve his murder.

Because the image of Ralph McJunkin at the Prescott Rodeo was taken slightly out of frame, one of his daughters later colored in his Navajo-style haircut.