They called him by his nickname, Muck. Or his alias, Jim Mack. But Ralph McJunkin was flying straight when he rode in the Prescott Rodeo.

Born in Colorado in 1890, Muck was second to the youngest of twelve children. The McJunkins moved to Farmington, New Mexico when Muck was just a baby. Soon they were prominent farmers and lumber merchants, and a couple of Muck’s older brothers ran trading posts.

Muck had no tolerance for such stuff. The wide blue skies and endless prairies welcomed him. Out there, far away from stifling civilization, he learned how to live off the land, how to speak Navajo and how to work horses and cattle. In time, he knew every river, arroyo and canyon, and could follow the dimmest trail to the remotest places. The life suited him.

But a living had to be made. With little education behind him, Muck tried his hand at coal mining before returning to the plains and finding ranch work. Lasting friendships were made with the folks around Farmington, and Muck was a good hand. He was working as a “sheepman” when he married a local Navajo girl at Aztec in about 1918, but when she set his belongings outside the door (the tribal custom for divorce), Muck moved on.

By 1920 Muck had taken a second wife, Addie. She had her own burden to haul with two children from her last marriage and a brother to look after. The family home was made even smaller by a friend who boarded with the family and worked beside Muck as a butcher down in McKinley County. The arrangement must have smothered Muck, and when Addie suggested they move to Peach Springs, Arizona, it was alright with him.

Peach Springs was a refreshing change, at least for a little while. It was cooler there. Addie, who disliked the idea going to restaurants and eating processed food, could grow vegetables. The couple now had a child of their own, and Addie wanted a settled lifestyle. For the next couple of years Muck found odd jobs and ranch jobs in the area. But his eye was surely on surrounding towns, where cowboys were earning good money in contests. The annual Frontier Days at Prescott was especially appealing. They were calling this event a “rodeo”, which Muck found out was a Spanish word for “round up”.

By 1926 Muck had saved enough money to go to Prescott and had the glory of participating in the rodeo. He didn’t win anything, but someone gave him a picture of himself busting a bronc. Maybe his dream was shattered, or maybe the restless Addie wanted a change. Either way, the McJunkins eventually made their way back to Farmington where Muck was hired as a deputy sheriff. He like the job well enough; it kept him out on the reservation and away from town.

Then came a fateful night that would change Muck’s life forever. He had been wrongfully accused of keeping confiscated liquor for himself and quit his job in disgust. His brother Jim suggested they go over to Aztec for a dance. As the evening wore on a fight broke out. Jim looked to be getting the worst of it as everyone tumbled outside. Shots were fired, including at least one from Muck’s service revolver.

In the end a man was dead, and Muck was on the run for fear he’d delivered the fatal shot. Although he was actually innocent, Muck spent the next five years drifting around California and Oregon under fictitious names. He made his way by picking up movie parts with other cowboys on Gower Street in Hollywood and ran a streetcar in Los Angeles. He was also gored by a bull in Hawaii. Trusted friends and family were visited for only short amounts of time before Muck would move on, seldom saying where he was going. Ultimately, in 1933, Muck was caught in a small Oregon town and brought back to New Mexico. He served a year in the pen for fleeing the murder scene in Aztec.

Addie divorced him, but upon being released in 1934 Muck started over again. He remarried, went back to ranching, helped build Blanco Trading Post south of Aztec, worked as an Indian agent, “wildcatted” for various oil rigs and raised a stepson and another daughter. Times were tough; the family was often stranded in remote places with little to eat. All the while, Muck tried to forget the past and his shattered hopes for becoming a rodeo cowboy. There were a lot of regrets, especially when Addie refused to let him see his oldest daughter. Not until she was a young woman did the girl realize her father was still alive, not dead as her mother had led her to believe.

Ghosts are hard to shake. Some say that gunfight at Aztec caused some hard feelings among friends; others say Muck might have got involved in something much darker. On a late afternoon in August of 1947, Muck kissed his youngest daughter and stepson goodbye and headed out for a ranching job. His car broke down at Blanco Trading Post south of town, and he dined with the owners. He was last seen talking to a trucker, and it was assumed he’d hitched a ride—until the next morning. Some tourists from Kentucky stopped at Blanco Trading Post and two children from the group went exploring. It was they who found Muck hanging in a nearby hogan with a gash in the back of his head. His murderer was never caught.

Jan MacKell Collins is the grand daughter of Ralph “Muck” McJunkin. She continues to conduct research on this fascinating man and hopes one day to solve his murder. 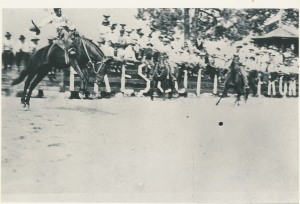 Because the image of Ralph McJunkin at the Prescott Rodeo was taken slightly out of frame, one of his daughters later colored in his Navajo-style haircut.

2 thoughts on “Tragic Tales of a Prescott Rodeo Rider”