Portions of this article have appeared in Colorado Central magazine. 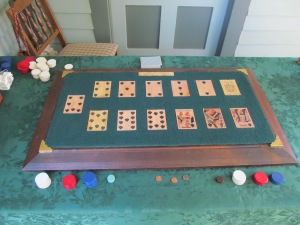 “The ancient card faces painted on the layout were doubtless faded and worn but to my boyish eyes they glowed like a church’s stained-glass window…[Gaye] started drawing the cards one by one from the battered old silver box. As he drew, I could see his lips move and knew he was making bets for imaginary customers. Deftly he slapped stacks of chips—we always called them checks—on certain cards of the layout.”

So did Nugget, the main character in Conrad Richter’s book Tacey Cromwell, describe how his brother practiced so he could get a job dealing Faro during the late 1800‘s. In the old west Faro was more popular than Poker, so chosen because it was amazingly easy to play. Nary a saloon in the West was without it, and several well known figures of the time—Soapy Smith and Doc Holliday amongst them—made their riches by banking the game.

With origins in France during the early 1700’s, “Pharoah“, as it was originally called, soon spread to the United States. In America the name was spelled Faro, but was also known as Bucking the Tiger due to the picture of a tiger that often appeared on the back of American playing cards. The game consisted of one deck and a Faro board painted with thirteen cards running from Ace to King, plus a square for betting on the High Card. The dealer placed the cards into a “dealing box”. The first card was placed out of play.

The rest of the game consisted of dealing the cards one at a time into the two piles. Simply put, the pile on the left lost and the pile on the right won. The numerical order of the cards was unimportant; players placed their chips on the painted cards to bet whether that card would appear in the winning pile. They could also bet on whether the winning card was higher than the losing card. A player could also place a “Copper“, usually an octagon-shaped chip, on any card to bet that it would appear in the losing pile.

Officially, three employees of the house were required to play Faro: the dealer, who dealt the cards; the lookout, who kept his eye on the bets and made sure the game was square, and the casekeeper, who used an abacus to track the cards as they were played. When three of the same number card (three threes, for instance) had been played, the casekeeper called out “Cases!” When four of the same number card had been played, the abacus beads for that card were arranged so players knew the card was out of play.

The game got more interesting towards the end, since players could bet on the cards that had not been played and increase their odds of winning. The last three cards in the deck were reserved for “calling the turn.” In this final bet, players could call the order in which the three cards might appear. The house paid four to one on these bets, but the odds of winning were purely chance.

As one might guess, Faro was as easy to cheat at as it was to play. Because the game generally moved fast, players could win via sleight of hand tricks while a seasoned dealer could manipulate the cards to favor the house. In time, even companies that produced legitimate gambling devices also made dealing boxes with a special button that could be pressed to release two cards instead of one. The house increased its odds this way, but the game could still be won by one simple guess of the final three cards. Arguments, fights, shoot-outs, lynchings, lawsuits and arrests soon became a trademark of Faro in the roughest of towns.

In Denver, Faro made its debut as early as 1860 when Vinton’s Hotel offered $1 stakes in the game. Twenty two years later, a writer for the Leadville Daily Herald noted that of four gaming tables at the Texas House, two were Faro and “were the most patronized.“ By 1890, The Arcade in Denver employed up to nine Faro tables with roughly 40 dealers. In his book Soapy Smith: The Life and Death of a Scoundrel, author Jeff Smith (Soapy’s great grandson) reports that the notorious bunco artist spent so much time playing Faro at the The Arcade that “some of his mail was addressed there.”

Like many professional gamblers, Soapy supplemented his career by playing and banking mostly rigged Faro games. Wyatt Earp allegedly dealt Faro in Gunnison during the 1880’s. Bob Ford, killer of Jesse James, was dealing Faro at (Old) Colorado City in 1889. Billy Deutsch, a famous gambler of Denver, was rumored to have broken the Faro bank at Monte Carlo during the 1890’s. Lady gamblers Minnie Smith and “Poker Alice” Ivers both made their living in Colorado not only at Poker, but also Faro. A popular dime novel in 1902 was “Little Miss Millions or, The Witch of Monte Carlo”.

In the end, Faro began losing its appeal amongst gambling houses during the early 1900’s. Most veterans of the game could identify crooked dealing boxes and card cheats. A 1937 Record Journal of Douglas County article warned, “Gambling Odds Are Against You” and extolled the evils of Faro. By then, most casinos had moved on to games of chance that bettered the house’s odds. Only Reno, Nevada was the last hold out, featuring Faro amongst its table games until about 1985. In time, historians forgot or failed to acknowledge that Faro was once the most popular card game in the West.

The ultimate cause of Faro’s demise? Played fairly, the game gives nearly equal chances of winning by either the house or the players. And casinos in general don’t like that. Indeed, Faro bet—and has lost—in today’s gaming world. Jim Finley, who dealt the game in Nevada for over three decades, mourned the loss of the West’s favorite card game in a 2000 interview. “It’s got a language of its own,” Finley said of the game. “The casinos today aren’t in gambling. They don’t want a game you can win.”

Kate L. Horine’s name was neatly painted on an old traveling trunk that my boyfriend happened across at the dump, near our home in Colorado. An elderly man had the trunk. It was full of leaves and dead branches, and from all appearances the man was set on throwing the trunk out along with the foliage. My companion intervened. Since you aren’t allowed to bargain at the dump for other people’s garbage, they secretly agreed—out of hearing range of the garbage police—to meet up down the road. There, my companion paid the old man a few bucks for the antique trunk and the two went their separate ways.

As all old trunks are, this one is really cool. It was manufactured by Meek Trunk & Bag Co. in Denver. Throughout its life, it has suffered various dings and scratches along random journeys. Gone are one of its leather handles, the storage tray and most of its paper lining. Indeed, the trunk was certainly well used, but still quite sturdy and full of character. On the inside of the lid, someone scrawled a cryptic note in pencil long ago: “3/4 sheets buffalo bill June 11 Boone Co.” There were no other clues, so the trunk nobody wanted was subsequently brought to my home, put in storage, and semi-forgotten about.

Over the next few years or so, I wondered from time to time about that trunk and the woman’s name painted on it so long ago. I meant on several occasions to do some research on her, but never managed to do so. Time gradually filled up my storage space with boxes, old furniture, gardening tools and other items, and the trunk got shoved to the back of the room.

After six years or so, I was finally cleaning out the storage area and unearthed Kate’s trunk (as well as five newborn kittens who just celebrated their 11th birthdays—but that’s another story). This time I made good on my mental note to try and find out who Kate L. Horine was. I found out some interesting things: she was born Kate Loomis in Indiana in about 1868. By 1910 she had married to a man named Horine, been widowed, and had moved to Boone, Missouri, where she lived through at least 1920. Also in 1920, she had a 17-year old daughter, Mary K., living with her.

By 1930, Mary K. had moved to Clovis, New Mexico. As for Kate, there was surprising twist: it turns out she had a brother and a sister, with whom she was living in Fairplay, Colorado—just a little over an hour away from where her trunk had surfaced. I yearned to know more about this woman.

Quite by coincidence, my research coincided with news about my boss’ cousin, Helen Johnson. Cousin Helen, as she is affectionately known, had just recently received the coveted “Hospitality Team Member of the Month” award from the casino she where worked in up in Black Hawk. Helen also lived in Fairplay, in a house built in 1872 by her great-great grandfather. In nearby Alma were Helen’s cousin and my boss at the time, Erik Swanson. Erik and Helen’s family came to the Fairplay Mining District in the 1870’s. It was Erik who pointed out that Helen received the award. It was also Erik whom I thought might know of Kate L. Horine, so I asked him if he knew anything about her.

He certainly did. It turns out that Kate Horine was Cousin Helen’s grandmother.

When we figured this out, the Weird Stuff-O-Meter (which measures all things strange and wonderful that have no plausible explanation) went into the red. According to both Helen and Erik, they used to play with Kate’s many trunks in the attic of Helen’s house as children. The trunks contained clothing from the Victorian era that Helen surmises belonged to her great grandmother. It even survived a fire in the 1930’s. Helen and Erik held very fond memories of their playtime in the attic.

Even more amazing was the revelation that the Cripple Creek District Museum, where Erik and I worked at the time, had a copy of a painting rendered by Kate. It is a portrait of a donkey and was a favorite artifact among visitors. “You know, she did some beautiful paintings of columbines,” Helen recalled. “She did some wonderful stuff, not only of flowers but some great scenery. She did some characters, too. She was really a very talented artist.”

So, how did Kate’s trunk get away? “My mother did a major renovation in 1952,” remembered Helen, “and there were things in the attic she had that disappeared. So it might have been taken then. But my sister Emily might have taken it, and she lived in the city where the trunk was found for years, so that may be how it ended up there.”

How the trunk bounced from Emily to an elderly stranger at the dump, however, remains a mystery, as does the odd message about Buffalo Bill scrawled on the lid. The best guess is that Kate scribbled his name and a date she might have seen his Wild West Show while living in Missouri.

Once its history was revealed, there was no question the old trunk needed to be returned to its happy family. My companion was glad to trade it to Erik for another trunk he had, one with no family attachment. I think he said he was going to sneak Kate’s trunk into Cousin Helen’s livingroom with a big bow on it. However he did it, Helen now has her grandma’s trunk safe in her care once again. And at the very least, Kate Horine’s trunk is living proof that inanimate objects can indeed talk.

Parts of this article first appeared in the Colorado Gambler magazine in 2004.